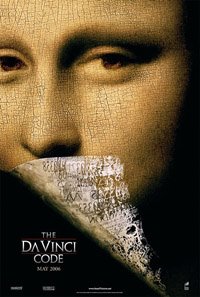 We enjoyed the The DaVinci Code movie yesterday. What is fascinating is the "return to earth" aspect. We return from space and land in the 12th century. This movie is very like "first encournters" with space aliens movies in '50s - they are terrifying and frightening - like the mad monk of Opus Dei. But as space contained riddles to enlightenment, so now does the Earth and its Church, the Roman Church of the 12th Century. Since 9/11 people have greater dreams of the Pope - in one such dream the Pope gave a woman gold coins, while a contemporary "suitor" gave her chocolate coins covered with gold paper - false coins. Contemporary dreams parrallel this; as Dreamers dreamed of UFOs n the '50s and '60s, today they dream of "travelling" in the 12th century & into the earth. The Earth is giving birth again to the Human condition. Jedi Knights are astral versions of Knights Templar & today almost half the books on the NYTs best seller lists are about Templars. Parrallel event is the ascention of Pope Benedict. I find him a man of character & of the old ways. As early UFO dreams portended visions or an ascending space age, this movie portends a renewal of the Old Ways of the Catholic and Orthodox churches of Europe. The dual triangles represent a yin and yang vision as the movie presents it, but in reference to the I.M. Pei triangles in the courtyand of the Louvre, the question should be not that they exist, but why is one big and one little? What is their nature? Why is one underground and one above ground? What are their qualities? If they are not identical as in the tai chi symbol, the one dominates or "territorializs" they other, and gives a clue as to the nature of the age we are in and the age ahead. In the previous age, from the time of Christ to the 14oos, the yin and yang was represented by the image of Madonna and Child motif. It was a yin age and the Mother figure ascended and dominated the yang figure, the Baby Jesus. The ultimate yin symbol of this is down the road a few blocks from the Louvre, on the Ile de la Cite, Notre Dame (Our Mother). In the old portraits and paintings, the Mother represented the Earth, the Christ Child the Human Race. These features tell the story; they were seperated, one from the other, in the time of Leonardo - he opposed the seperation as the movie implies and it is clear in his pictures by

suggestion. See Mother and Child & Triple Goddess here. This is an awakening moment for our century. In Alchemist terms (Templar) the Horse has arrived in the Courtyard.

There is a rational explaination for everything in the world. Zen calls this the world of samsara. Then there is a degree of irrationality of everything. The pattern and substance beneath this world is called nirvana. Templar travels the path to nivrana. He is the zen man, the Jedi monk/warriar described in The Tao te Ching as the Knight of Dark and Mysterious consequence ("The ancient masters were subtle, were possessed of ineffable efficacy, and were in dark and mysterious confluence, so profound that they could not be perceived.' - #15, Tao te Ching) and illucidated in the air as Jedi Knight. His sign is two on a horse. This journal was begun with a dream about Knights Templar & a dream of two on a horse.
Posted by Bernie Quigley at 2:39 AM