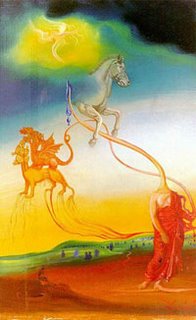 This blog is about a change in the West. Varied swamis have paved the way. Considered here are Dante, Rabbi Loeb, Madame Blavatsky, Einstein, William Butler Yeats, Wolfgang Pauli, Neils Bohr, Andre Breton, Rene Magritte, Salvador Dali, C.G. Jung, The Beatles, the Apollo astronauts, Lao Tsu, Tolstoy, Black Elk (at right, below), Neo, the 14th Dalai Lama, Kurt Cobain, George Lucas and Stephen Spielberg. The most recent to appear is J.J. Abrams, creator of Lost (see below), but others haven’t arrived yet. Dreams, the deepest and truest stories, are generally silent stories told in pictures and this blog has much to do with dreams. In blogworld, this story can be told in pictures as well. As is the nature of blogs, it begins at

the other end, here, and ends below. But blog is its own literary form and genre and has its own life force so click here (Cities are Particles and Waves and So Are People) or here (Zen Quilting) or here (Salvador Dali's Dream of the Second Coming of Christ as a Buddhist monk emerging from the Christ wound of Pegasus, the Aquarian awakener - at left, above) or start anywhere you like, as is the custom in blogworld.
Posted by Bernie Quigley at 4:53 PM

I found your blog when I was googling for love and romance articles. I also visited an interesting site at http://top-personals.net that is also related to single lever bath faucet and has some useful tips for singles, check it if you�re interested. Adult Singles

Hi Quigley,
Still enjoying your blog. I recently found a site called Zaadz.com, where a lot of people are talking about the future of mind, spirit, science, etc. Anyway thought you might be interested, FYI. Surf the Tao and Aloha!

Thanks, Quigley, for your most recent comment! I'm heartbroken I wasn't able to be in Himachal for the beginning of the march, but then I have 6 mos. (till they plan to reach the Chinese border). :-)

Thanks Bernie for your feedback. I am intrigued by your thoughts on "Poetry in America" Please unpack this a little more for me.

I am so glad to discover your blog, and spent much of the day devouring it with great admiration. I never knew John Lennon's 'eggman' in "I am the Walrus" was in homage to Dali's painting? Wow. Thank you so much for that, that's a keeper.

I am familiar with "Poetry in America" just not quite sure the desert is Texas? I am not even sure the figure is America itself. My sense is that these figures are the world stuck and trying to fight their way out of the new global desert, the new born 'poetry of america'. It is the world (which of course includes American's) clasping the light of Christ, dancing with flowers for arms, coming with no danger, only an invitation to love.

As you may know “Christ of St John of the Cross” depicts the harbour in Port Lligat in Spain. It is a celebration of Dali's rediscovery of Catholocism. The landscape is a merging of Port Lligat in Spain with Galilee, with boats borrowed from Velasquez and Le Nain to boot.

I am no art critic. My sense is that given Dali's propensity to mix metaphors and landscapes, I am just not so sure the desert is Texas or the figure is America? My sense is that the world is being consumed by the poetry of commercialisation, commoditization and consumerism. This is the poetry that consumes the world?

Hence the blood of christ is now the dripping blood bottle of Coca Cola, and phone oozing black ink as the mass media (especially Hollywood and the Press) begins to consume "the word" and in so doing, the making of meaning, Its darkness a contrast to the light of the candle in the cave of the human spirit, the light of Christ still there - if we want to see our way through - to guide our way back to our innocence, our hearts, our children, our lives, our selves.

These cosmic athletes, two sword fighters like yin and yang, graplling air around the phallus. The dance continues around and around as time runs out for Africa, the cradle of humanity. In the distance a naked child, pure and clean seeks the "time of day" with the stick, as all our ancestors did before the poetry began with its soft watches, machine like consumption ordained poetry.

Here is what Dali said of Poetry of America in 1966... "The greatest passion of the American people is when they see little children killed. Why? Because, according to the greatest psychologists in the United States, the massacre of the innocents is the favourite theme, the one which is found in the innermost depths of their subconscious minds, since they are constantly annoyed by children, so that their libido projects itself filling the cosmic surfaces of their dreams. If Americans adore bloody orgies and the slaughter of the innocents and soft watches which run like real French Camembert when it is just right, it is because what they love most in the world are 'dot,' or bits of data, those information bits that symbolise the discontinuity of matter".

But screw Dali. I am intrigued to hear your thoughts on this. As an Americano, half a century later what do you think? Are Indo-China the new breed of geopoliticus children? What would our twirly moustached, mad capped genius made of their lost innocence?

On a recent trip to Beijing, I sat in a mall, listening (agast) to "Santa Claus Is Coming To Town"... thus I heard the "poetry of america" lives and breathe large in the new geopoliticus desert. I spoke to many Chinese friends who said that the Olympics had turned Beijing into 'just another American city". The same is true of Delhi, Gargaon and Mumbai. The "New India" is hardly anything close to the independant, "Desi India" of Gandhi or the "Soviet India" Nerhu envisaged. Only Lord knows which way Mao must be spinning in his "re-educated" grave?

That's is what I make of the Poetry of America. The poetry of the new global child. And 50 years later more children have begat in her image. What do you make of her hurt and her heart?

Kashmir: I htink Dali and the Surrrealists all like to freak people out to keep out the uninitiated much as Tibetan mystics used to go live among brutes so as not to be disturbed. Therer is a long series of the Knight with Spear coming out of the Unconscious. It goes on for years. I put some of them on the Texas Dali essay. These are in fact the same as a long reoccurring dream - if you Google Geopoliticus Child Unus Mundus I have seom thoughts on that; possibly this is prophecy; that is, an entry into a realm of time which other mystics may enter - the piano is talisman. It follows like a dream. Dalihimself is "Child" following Anima - the woman in the picture, finding the reawakening Self.

I agree, its appreciable how nicely the author has presented his point through this post