'I'd rather be dead than cool. - Kurt Cobain

The richest dream I have ever had was of three ancient men in old, gray robes and wispy beards, kneeling in the pale light of an ancient Christian/Islamic temple, stone with large columns, like the Hagia Sophia or the Church of the Nativity. There was a swirling ball of light before them. I was told to keep my head down because I was in the House of God. (My children have found a very close equivalent in Magic: The Gathering cards drawn by artists at just around the same period.) Most lucid dreams occur between four and five in the morning, but this was at approximately 11 PM Eastern time (five or six PM Pacific time). I learned later that this dream occurred just as the singer Kurt Cobain died. I did

not know who he was, so I learned. I felt he resembled Yeats’ Aquarian, the Unicorn born to a prostitute in a garret in , a squalid picture not unlike the grunge scene in the 1990s, noted for heroin and cappuccino from which Kurt Cobain arose to short prominence in what was, as far as I can see, a singular quest to find God. A suicide in his early years, he was never able to kick heroin or depression. His short life is a starling picture of in a tough logging town in the . An account of his death in Rolling Stone Magazine stated that when he was still a child his mother, in a fit of depression, tried to kill him by shooting him in the head. When the gun misfired she was shamed and threw all the guns her husband had left behind in a river. The young Kurt fished them out and traded them for his first amplifier that day at a pawn shop. His Awakening came while sitting under a leaky bridge while he struggled with poverty and drug addiction. I did not know what to make of this dream at the time. I still don’t. Maybe I will learn someday. I have held on to dreams which felt important for up to 30 years and suddenly found their purpose and understood them. I was prompted by this dream to study the The Three Celestial Ones which an earlier chapter is about, as they seemed so vivid in this dream. I do know that something seemed to happen in the world at about that time – something opened. I have had a variety of very interesting coincidences with a variety of Kurts since then. Another dream episode: One day 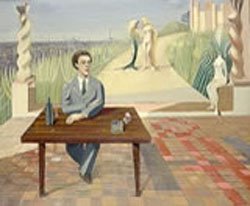 I was talking to a student in my office about a dream he was having of Andre Breton (here by Max Ernst). In the dream he saw 13 concentric circles and as he drew them with pen on paper to explain, the electricity in my computer started wiggling. I told him to stop but he was wrapped up in his drawing. When he got to the 13th inner circle all the electricity went out in the building and there was a large explosion. Outside was a big hole, maybe eight feet across and six feet deep. It came from a surge in electricity they said, but they didn’t know what caused it.

In days gone by in the West, this journey into dreams was done by shamans, the one person in the tribe who could go into the unconscious and come out alive, bringing with her or him the goods of the psyche to show to his or her people. Anyone else, it should be noted, would risk madness. But without the shaman, the people were lost souls, lost in the material world, without access to the inner life. 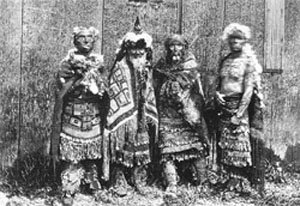 Shamans are usually female and in cultures where they are male, they are almost always males that dress as women. The she/male is the link to the feminine ocean; the land of the dead, the Unconscious. The she/male’s female nature allows her into the unconscious without danger and her warrior ability allows him to climb back out. Characteristically, the shaman is the tribe’s soothsayer, healer and dream interpreter. Very often they are called to the position by a voice from the Unconscious, an archetypal deity of the tribe. They also have special roles in ceremony. Winktes, she/male shamans in New World Indian tribes, enter a trance state to find the appropriate name for newborn babies, for example. In rural , they often dressed like Marilyn Monroe when I was there in the mid Sixties. There they have an unofficial role in the carnival atmosphere of city squares in the evening, with the fortunetellers, snake charmers and astrologers. Western psychologists, of course, considers them to be insane, but they change their cloak of inauthenticiy so frequently that their credibility dwindles with every new garment they don.

Needless to say, this role has disappeared in the West, but at the cost of intimate knowledge of the Unconscious. Not only is this a loss to everyone in the West, but it was also a loss to those who would be shamans. Many traditional shamans, like Tibetan monks and the Taoist hermits of ’s , practice celibacy, as the sexual practice is too tumultuous and disturbing to the life of the unconscious. (Too violent, said Surrealist painter, Salvador Dali, who was more shaman than artist.) The riddle proposed by the Rhine Maidens alludes to this. The inner life, they tell the journeyer, can only be seen by those who forgo love.

I have been listening to my own dreams and other peoples for 40 years. In the absence of shamans, here are some thoughts on dreams:

- You cannot have a productive dream life if you drink alcohol. (Daily drinking can short-circuit psychic life and inhibit REM sleep. Alcoholism, says one Zen Buddhist monk, has become a substitute for religion in the West.)

- Dreams accompany life. Coincidences related to dreams are important and are part of the dream and the life.

- Dreams form a kind of archaeology to your life and perhaps to your ancestors, but not if you don’t have a life. Dreams are not a substitute for life or an escape from life.

- You cannot have a continuously productive dream life if you live in a big city.

- The Chinese practice for activating the unconscious is to live three years away from the city, which is a rational matrix, and live alone or with monks on a sacred mountain. My own experience more of less concurs. In I dreamed sporadically. Exactly three years later on the farm in the foothills of the mountains, dream activity became much more enriched, eventually richer than I every imagined possible.

- Some people have a gift for dreaming as some people do for painting. Women are constitutionally better at it than men. Of the two most gifted dreamers I have ever encountered, the one is an Australian woman with access to the most primeval outbacks and nature. One of her dreams is given in the entry titled Returning. She has five children and had her first at about the age 18, and thus has lived in a psychological cycle in sync with the biological cycle. She is also to date unimpeded by higher education and the objectivistist matrices and orthodoxies which come with it. She is keenly intelligent, fearless and inherently curious by nature. The other, miss3, whose dream of the Sun King is discussed throughout this journal, is similar to the Australian woman. She lives in the northernmost forests of Ontario in the glow of the Arora Borealis with extended family on the very edge of the artic regions, far above city lights.

- Individuals with an aboriginal cast of mind are naturally good at dreaming. Related to this, people whose ancestors did not pass through the Enlightenment and the Age of Reason are better at dreaming and have better dreams than those who did. Zen Buddhism as it developed in classical Japanese culture is the antidote for those who did, and it was built specifically for that purpose by the analytically-inclined Japanese. It works as well for the analytically inclined in the West.

- People with a Myers-Briggs constellation of INTP or INFP, introverts who see the world flowing between events, are naturally good at dreaming. Taoism has it that the Inner Journey requires the two people; one with the gift of entry, the other able to understand what was there. These are different and opposite abilities. Whoever is good at the one will be constitutionally poor at the other.

- The Days of the Dead, Halloween, is, according to many folklore traditions, a period when the spirits of the dead run confluent with the living. This is said to be a good dream stretch, lasting to late into November.

- Births and deaths of loved ones, either blood family or friends, affect dreams. They are portals.

- Certain places are better for dreaming than others. The place for you to dream best is the place to which you belong.

- Between four and five in the morning the body temperature is at the lowest, and consciousness at the lowest ebb. This is the time when most animals are born (it is true with my animals) and according to folklore, when most people die. There is a dream window here that can be opened. This is a very dangerous practice. This is the hour of the wolf.

It should be stressed here on this last one, that this is extremely dangerous, particularly for men. It is a direct confrontation with the Unconscious. You could lose your mind. You could lose your soul. Or you could die. But everyone dies, and it is better to die like Kurt than not to have lived like Kurt. Live for love, die for love. Risk everything.
Posted by Bernie Quigley at 5:25 AM

Hi there, I was surfing the internet and I found your blog. I like the way how this all works.