The End of the World: dream of "Dali" 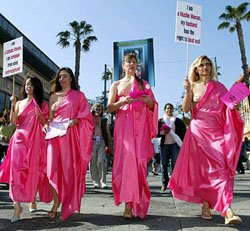 This more or less completes the ideas and themes which comprise this journal's original intentions. The other night I had a dream that I was driving into a city with "Dali" a Hindu Indian woman with whom I had been travelling every day to a city for lunch, over a bridge; she doing the driving. When I told

her of my fondness and affection for her, she said, "I'm dying now." This is a dream of the Anima, the female part of a masculine personality - the muse, which guides to prose, poetry and pictures. Death in a dream like this, where the character is arcane as in Tarot cards, generally means a change and a rebirth - a prelude. It was a suitable dream and a suitable time for this to end, as I'd received a yellow robe from my mother-in-law and been writing in it the last two years, then at this Christmas I received from my wife a beautiful long, green fleece robe, made by her. I have had four robes in the last 21 years of marriage - red for the first ten years, then dark blue for another seven years, yellow during the Awakening of this, now green. All marking significant passages and transitions. Like Jim Dine's Husband with His Left Arm on Fire (above) - robes take on a significant cast to the 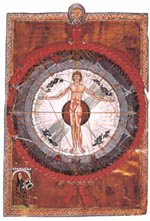 quiet life - synchronicity, say shrinks; the quiet river which tumbles beneath the city - meaningful coincidence. Likewise, there have been dreams to mark these transitions. On the day before I married I dreamed that the Indian warrior Cochise came to my car and we two drove over a bridge, with him doing the driving. This dream with "Dali" was such a dream. One of the first entries in this journal (October, 2005) is miss3's dream of a woman dying, and rising from the death was the Sun God. The Sun God archetype appears throughout this artist's work, perhaps the greatest dreamer of all time, HIldegard von Bingen.
Posted by Bernie Quigley at 5:28 AM