More from the Life of (Lawrence) Quigley 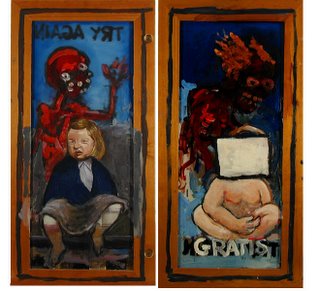 This diptych by artist Lawrence Quigley suggests again Japanese folk lore in which children are all gods before the age of six. The Hungry Ghosts harbor close by – increasingly, at around age five, they begin to leave. Hippie lore and common country practices propose the key trick for a pregnant woman to identify the sex and life force of the child. What you do is hang a key from a string (in , the hair of the mother) over the belly of the mother when she is seven, eight months pregnant. If the key swings to the left, the child will be a girl. If it swings to the right, a boy. (I mentioned that I’d tried this to an entire physics department when my wife was pregnant and they all said, no – you must have moved the key.) If the key swings rapidly the child will have a strong identity or life force. This does not happen when the child is out of the womb.

The child leaves the swirling life force behind to enter the world. Yet the spirit world persists. And the spirits do not entirely leave the picture. Quigley’s pictures suggest the Japanese Bunraku theater in which the puppet masters work behind the puppets draped in black sheets, suggesting a life force sensed but not seen from the Universe in which the players on the stage are only representative actors.

You see it in subtle play in movies like Hayao Miyazaki’s beautiful Spirited Away, where they insinuate their presence. 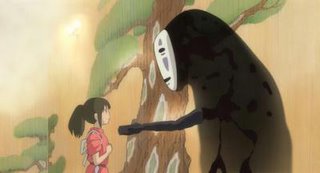 In this movie, a little suburban girl from a business family and community finds a confrontation with a ghost figure after an accidental encounter with the Unconscious – (the black shape presented is actually very similar to first dream encounters by real people). In ’s Princess Mononoke a similar girl’s personality is closer to nature than the suburban girl’s, and she has carried part of the Swirling World of the womb into the world with her. 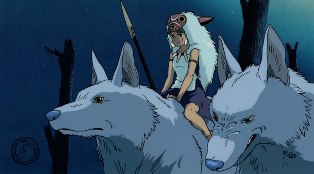 The Wolf Girl's presence from the Unconscious World is manifest as a spirit animal in which she shares spirit and lives in equilibrium with the Ghost Figure. 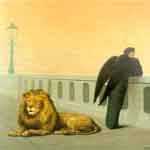 The silent avatar is also present in this painting by Magritte - the alchemical lion representing something brought from the Unconscious by the Elegant Traveller by which the person is transformed to sacred purpose on earth (at a crossroads/a time bridge) – the life of the Self in transit to earth and lineal time. Lawrence Quigley and these other artists are empathetic and intuitive & they express the same story in different quality or degree of relationship between the inner world and the world at large. Their artist’s gift is like the shaman’s gift – they enter the world unseen where we on the outside are unable to go and they return with truths for living a better life. My kids have probably seen every child’s movie in existence, from Disney to Spielberg to . By far their favorite movie is Princess Mononoke. They are still young enough to sense the inner world in the telling of the story and the quiet background and hushed tones of the telling speaks to their higher nature. 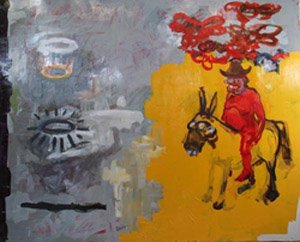 Recent work by Lawrence Quigley on Life of Quigley. So much could be said about this picture . . . better to be silent but three things first appear: . . .1 - the first a dream I had after my four kids were born and raised I dreamed that I was approaching the top of a mountain – my side was filled with love and color and the other side of the mountain was black and white . . . 2 - in Taoism, there are three

phases of a life’s journey – one is going through life and seeing an ox ahead in the distance (or a horse or mule) the next phase is meeting the ox and riding on it . . . the third phase is leaving the ox behind when the life’s work is beyond and the journeyer approaches old age . . . . this artist is still approaching the fullness of his life’s work . . . 3 – what I find fascinating here is an inner story (wu-chi, we say, unmanifest tai chi – like Man Ray’s picture of two eggs) – life about to happen in the grey areas. Here the rider is on a red mule which has come to life in another Quigley painting, but now the man is red – the man 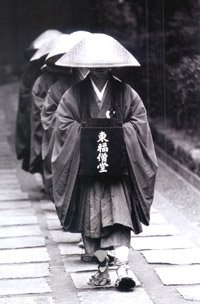 and mule are one and taking action to face a transition – the rider is life manifest in the color realm and the shadow (wu chi – unmanifest life) surrounds him. Particularly in front. Indeed, the grey shape ahead and the color shapes in which the rider sits could well be divided by a stream, like a tai chi symbol. This is the dream of the pilgrim who reaches the edge of a stream – the mule will bring him there – crossing the stream to the new world of Creative Awakening. This is a classic dream of Awakening but the artist/pilgrim has to himself or herself take the risk and initiative to cross the stream. What is good here is the mule rider faces left of picture, direction of the Inner Life – the world of, as talked about below in the Magritte picture of the bird flying left. Is the direction symbol used for negative numbers in math (<), but it is not negative, it is the inner world of the artist. (Likewise > represents positive action.) Organic artists know this intuitively. This is the artist about to cross the stream to the fullness of his work. In essence, the artist's path is the same as the monk's.

Here in this most recent work, Quigley shows himself to be one of the artists with dual abilities - he has the gift to paint and the absence of stress in these pictures shows how it comes naturally to him, and on the other hand he has the innate ability to experience original consciousness. Piggy here has an inner joy - she or he is a Magical Animal - there are many pictures of the Self emerging as such a magical animal in original dream life - an awakening or a quickening of a movement of the inner life. Here Piggy has a halo - an unbroken circle of light in the sky, suggesting new Awakening. If this artist remains on the Artist's Path - which is the path of Common Awakening to the World - the work will progress as his life progresses. Although his work is widely misunderstood, Salvador Dali's work can be looked at over a lifetime as one dream, telling the story of an ordinary life which became a cosmic life, and in an important way, the life of the world evolving around him. Dali I think once said, "I don't know what my paintings mean, but I think they mean something." It is important for him to paint them and remain true to that thing which compels 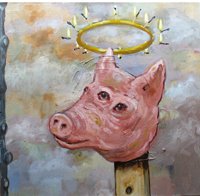 him to accuracy in perceiving and presenting his inner vision, than to understand. No explaination is necessary. Time will explain as all inorganic art yield to time. My wife and I purchase art from a woman who lives in the mountains of mid-Appalachia Virginia when we are homeward, Linda Gourley. Above our fire place mantel is a lovely woodcut of a woman with the head of a bird, raising her arms to the moon. Her body is covered with eyes. There is a very similar picture by Abbess Hildegarde von Bingen of a wall of eyes leaving a woman's body and rising into the sky. I asked Linda if she knew the artist. Never heard of her. Yet she dreamed the same dreams, 800 years apart. All artists are one artist. Go back to the picture on top - in the shadow are three circles on the other side of the river. The bottom one is identical to the one here in Piggy/dog/Magic Animal. But that which was in shadow is now in light. The artist has crossed the river.

Posted by Bernie Quigley at 3:16 PM

Alexey said...
This comment has been removed by a blog administrator.
3:41 PM

where can I find more of his abstract work? I checked his liked site but it was mostly portrait stuff.