Jesus don't you wait up . . .
Jesus I'll be home soon . . .
Johnny Cash/U2
I was born with a North American sense of disconnectedness that is typical of the first journeys to this continent. And as they all spoke Irish in my grandmother’s house after church on Sunday morning, I was struck on how they’d all been still and quiet for at least a thousand years in their stone churches on the old sod, then shifted quickly from Ireland to England for awhile then Boston and the little mill town Fall River just south, all in barely a hundred years. Some had gone to and worked down the to – women who waited till they met an Irish soldier during the Civil War to bring them North to the other Irish. Others came straight with 30 others kinsmen, doing odd jobs – some were circus performers, steeple jacks and prize fighters. In the old country some were Catholic and some were Church of England but they all converged in the Boston Irish church by the vicissitudes of dislocation. The only thing that kept them together was Ada Mary Synnott, my mother’s mother, and when she died, their sense of themselves as Irish people died as well. In one way they were free to be Americans. But their Irish soul and the old sod would no longer beckon, and there was a loss felt which found nothing yet here to replace it. The factories were all empty then – moved South – and the beautiful elms which lined the country streets were all dying, just as I was coming up. It left an empty feeling so as soon as I could I headed for , determined to start again from scratch. I loved and still do, but I’ve never been back barely in 25-some odd years. I met my wife there and we headed South to a little farm in the sweetest town in the made sweet by the smell of tobacco wafting through the ridges in the neighboring tobacco fields. In fact the town was called Tobaccoville, in the foothills of the , and the street we lived on was . Our babies were born there and my American life began there - connected at last; this time to red clay, after long breakage which began on another continent 100 years before.
Just as our third young ‘un was about to come up, I woke up one day with a picture in my head. Was a dream just before waking and it was a simple picture of a circle with an X drawn through it. It was a dream which brought a feeling of strength and curiosity – as if something was about more interesting than everyday life and I was moved somehow by it. So I drew a picture of it, put it in my pocket and went to work. That afternoon at the college I worked at I took a lunch break and wandered through the college book store. My eye was caught by the book Black Elk Speaks. I’d vaguely remembered it from college, but I’d never read it, so I picked it off the shelf. In the center there was a section of pictures and I opened the book to a picture Black Elk had drawn of “the center of the world.” It was the picture I’d dreamed of that morning and stuck in my pocket. 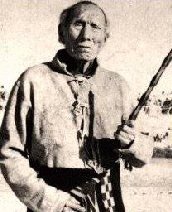 Black Elk was a Holy Man and Warrior of the Oglala Lakota Sioux. He took part in the Little Big Horn raid and was a boy soldier present at the death of Custer. But he is known to the world for his visionary dreams at the age of nine. Anthropologist John Neihardt recorded his tale in the book Black Elk Speaks – great visions of the Grandfathers, who came from the four corners of the earth representing the Powers of the Earth. Shortly after, I began a series of dreams – they were deep, visionary dreams, the one related to the other over a three-year period. The first dream was of walking through the woods with a group of Indians. I had often dreamed of Indians when I was first married – three days before my marriage I dreamed that Cochise entered my car to drive my life across a bridge to my marriage. With these Indians we walked a way through the woods and then we came to a stone circle in the middle of the woods. My Indian friends stood around the circle, then all of them put their weapons down and began backing away through the woods. I called to them asking them where they were going and they just shook their heads and backed away, refusing to go any further. I was left alone before the stone circle. 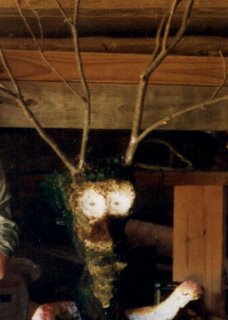 Over the next few nights I had tumultuous dreams – lost at sea without my Indian guides, then I dreamed of a stick figure climbing out of the stone circle. He was around for several years and was accompanied by a series of coincidences which were first astonishing, then became commonplace. One anecdote: A friend was going to to be married and a second friend, married to a Laotian woman & with family in the vicinity, was arranging the marriage for him. I much wanted to go as these were my two oldest friends, but circumstances and cash flow prevented my going. Then one day I woke up after dreaming that the stick man had climbed out of the stone circle and I had an idea. I would write a letter to The Economist – something in a comic vein – and I just kind of knew that my friend in Asia would read it as I knew he took The Economist, and I just knew that he would read it just when my other friend was visiting Thailand to be married, and we three could share a joke together. So I wrote a note comparing the upcoming NAFTA treaty to the marriage of a man whose young Argentinean wife had cut off his penis in his sleep. The magazine published the letter and sure enough, a few weeks later I received a call from the day before the wedding – my two friends had gotten a good laugh, reading the letter together.
This would be somewhere around 1993 and for these two or three years life took on a new dimension. Stuff like this happened all the time. Subtle awareness appeared to come from nowhere and from somewhere else I’d no intuition or knowledge of. During this period I read the wonderful book, Drawing on the Right Side of the Brain and learned to draw fairly well in a very short time. I began to paint some of my dreams. This picture at the top with flames coming out of the head was dead center of this period. I named him Parthalon Flyingsnake DeCoursy 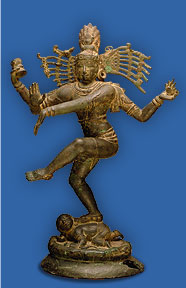 with help from my children who thought Bernie Quigley was a boring name anyway. The Flyingsnake thing is from a dream I had when my daughter was born and a ride in the truck at that time when a hawk, carrying a six-foot-long black snake almost wacked my windshield, dragged down from the air by the weight of the snake. She was our only girl and the snake in the sky became kind of a symbol of our family. The Hair-on-Fire picture suggests the emergence of an inner life at the age of around 50, which I had never experienced well before. Another painting – several like this – had a secondary character falling away and a new man emerging from it as if from a carcass. I began to read extensively then in Tibetan Buddhism, Hinduism and in the work of Swiss psychologist C.G. Jung to understand the dreams. This picture is similar to the Hindu story of Shiva abandoning his old personality and rising out of it for a new creative dance – a natural passage in a life well and fairly lived. I have mentioned this in one of the first entries in this journal and will mention it again. I learned about it myself by painting these pictures.

I personally experienced profundity that I’d not known existed in the human experience during this time, but I never dreamed of my Indian guides again. The very end of the dreams occurred during the rise in the sky of the Hale-Bopp comet which was clear in the sky every morning for 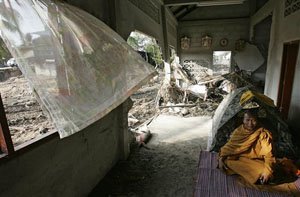 about a month from my Tobaccoville farm when I went out to feed my sheep. On one of these mornings I had a dream of a monk in yellow robes in the sky – a parallel event to the comet – who looked exactly like this fellow in a picture taken during the tsunami of December, 2004. I dreamed of him again that week, quiet in a sea of bats while talking to an Australian friend about her dreams.
Then at the very end of the dream series I dreamed I was walking through a temple/museum type building carrying two books (which presumably, I had found in the Land of the Dead). The one said “Hinduism” and the other said “Buddhism.” I was leaving the world I had entered when I was left by my Indian friends by the stone circle. As I approached the doors to the road outside I noticed a man to my left (the creative, intuitive side of consciousness) wearing brown, working man’s clothing. Then I notice he was wearing war paint on his face – it was one of my Indian guides escorting my exit from the temple. Then he reached over to the books I was carrying and he dragged his thumb across the cover. “That’s trash,” he said.

A knowledgeable acquaintance with a beard and an authoritative baritone quality to his voice once said my Indian guides could only go only so far and I was left to go to the place of dreams with the tree man. Perhaps he is right. Perhaps is it my own biological or gene history in which I was traveling – tree 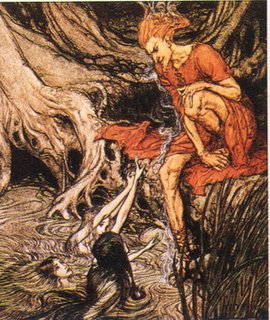 man (dryads, Chernunus, the green man, the Ents from Tolkien's Lord of the Rings, and the fine characterisation above, Dryad, by Vancouver artist Marian Churchland) are characteristic of the Celtic and English folk tradition of my biological ancestors. Perhaps my Indian guides do not like what I brought back from the Land of the Place of Dreams because it is not where they go. Perhaps they were saying I should not go there either. But I went anyway. And brought back this picture of Parthalon Flyingsnake DeCoursy (4'x4', Oil on Sheetrock). My little boy, five years old then, said it looks like Loki - in one of his children's books about Norse gods, Loki was presented with his hair on fire. Notice the Three Sisters in the river in this classic illustrated manuscript of Loki. Siegfried takes the warrior's path and avoid's the Rhine Maidens' song. Loki puts his foot in the water. (More to come on the Three Sisters in Quigley in Exile: Notes from the Land of the Dead.)
Posted by Bernie Quigley at 12:55 PM

Smokey said...
This comment has been removed by a blog administrator.
3:54 PM