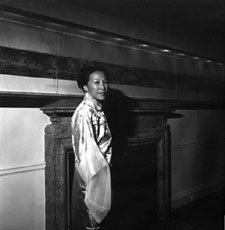 Photographer Gary Schoichet’s photograph of novelist and ambassador Betty Bao Lord is the embodiment of chi. There is a cold light to it – the fire is out, the building is empty – but the woman with her quiet smile brings the life force to the empty room. There is an elegance and grace which expresses a mature and timeless yin quality. I was brought to ’s as a child in the early 50s and found a lifelong fascination – I still remember a beautiful, ancient Chinese woman selling herbs in a basement shop that sold traditional remedies. Batches of chicken feet and the like. In dreams chi finds you and beckons you. This could be such a dream. One can find first footings in a new world and a richer life in what Taoists call “Entering the Stream” – the first Awakening of the Inner Life by a call – very often it comes in a dream. 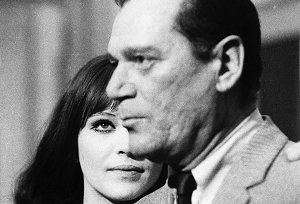 Quietly consider the composition of your dreams over a very long period of time. 10 years or so ago I dreamed of a visitor from the Land of the Dead. He came to my house and my house was in in the dream (this was several years before the movie The Sixth Sense but it was the same situation – Philly, like , has its own distinct chi or life force). The Dream Visitor was named Eddie Constantine. I knew who he was. Eddie Constantine was a well known actor in French cinema in the 1950s and 1960s. I once saw him in the Jean-Luc Godard movie, Alphaville – in which he played a kind of hybrid character – a space/time tough guy detective. I won’t go into the dream now but will later in Notes from The Land of the Dead. But in the dream it was clear that the Alphaville in my dream, from which Eddie Constantine came was the real “Alpha world” – the Original World of Essence. Recently, there has been a movie named starring Keanu Reeves. I went to see it out of interest in my dream. In this movie, Keanu played John Constantine, a spirit or angel, sent from the Original World (Heaven and Hell in this movie). 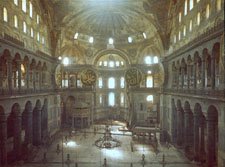 There is of course a third . institutionalized Christianity. In technical terms, he was the first Christian. He proclaimed the Edict of Milan in 313 which institutionalized Christianity in . His church, the Hagia Sophia, which may be considered the first Christian church in this regard, fell to Islam almost 1,000 years later to the day (and may be considered clue to the riddle of Revelations in which John predicts the Christ’s reign would last 1,000 years – many of the old Byzantium bend do not consider these later groups – RC, C of E, Baptist, whole deal - to be real Christians) All of these can add insight. There are three things – the Godard movie Alphaville with its Otherworld and its agent of the otherworld, (Eddie) ; there is the movie , with its Otherworld and its agent of the Otherworld, (John) , and there is the historical condition (used here as a dream artifact) – , Christianity’s first institution of the Otherworld and its historical agent, Constantine. Then there is my dream of the Otherworld (enter in ) and its agent, the dream Traveller, Eddie Constantine. All of these can form a kind of symbolic or archetypal archeology in a person’s life. Perhaps this is the most worthwhile purpose of archeology. One of my children has dreamed of Alphaville and a most remarkable Alpha beast which came from there – the Alpha Man – and he was it – this is the dual nature described in the Upanishads – self and Original Self. 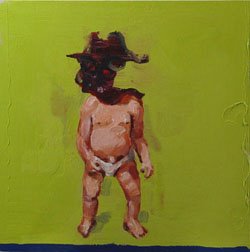 This painting by artist Lawrence Quigley of a baby suggests dual nature boy(or girl?)/deity or daemon - in Japanese folklore all children are gods under the age of six. 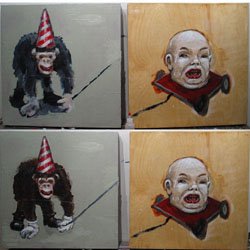 I love this artist. Lawrence Quigley (no relation) shows great strength in paint and subtlety in the qualities of his lines. Artists have the ability to record their own archaeology over a lifetime – if they are good artists, like Quigley, and find their way to the stream, their art will reflect the times as well. This picture could bring a psychic portrait of the artist’s life at this period of his life’s work – the Monkey is rich and fully formed and doing what monkeys do best – clowning around. If you dream of a monkey the Trickster God has found you and will lead you on a journey. He comes at the beginning of a journey and then when you are on the trail, he disappears into the forest and something else finds you. But like this Monkey, he is at the beginning of a parade. The man on the back wagon is only a chattering head. He is undeveloped. 30 years hence he will be fully developed if this life is lead fully and the Monkey will be gone (or dead or mad or imprisoned or stomped on as stomps on the dwarf which was his old personality which he had outgrown). Lawrence Quigley’s site offers a variety of sketches done riding the subway from mid-town to Wall Street and on to . The roaring train brings a quiet to the artist’s mind and it is reflected in these lovely drawings. The artist is quick and awake, watching and drawing the people, the people are quiet and benign, but they both share in something & does the train . . . 20-some years ago my wife and I rode the same train . . . the same silence & clatter . . . one day when we first met we kissed passionately on the train . . . for the rest of the ride the old Jewish men on the way to Brighten Beach raised their eyes occasionally and smiled, giving the thumbs up sign . . . even the Hassidim men smiled . . . but then they moved to another part of the train. . . . I wish this artist would move to as appears on the verge of an Awakening.

A few more thoughts on dreams: A. You cannot harvest dreams. You cannot say “when I retire I’m going to concentrate on understanding my dreams.” Your dreams won’t come. Dreams call you to a path – if you are good (Integrity) the path will be a path to God. Dreams harvest people – when a dream calls you, that is the time to go to it. B. You cannot pay someone to explain your dreams to you. Here in the mountains of the crusty old Yankees bring in dowsers to find water. The dowsers do not accept pay and the water won’t come if they do. It is the same with dreams. C. It is not good to attempt to enter your dreams as dream life verges on the occult and it is a place of danger. Religion – any religion, but preferably one’s traditional religion – is the usual path of managing the occult and it is the best path. But if you have an important dream you will know it because you will tell someone about it & you will remember it. Everyone remembers a particular dream they had and it is an important dream. Dreams come in pictures and only occasionally with words and usually very few words – that is because the language centers of the brain are sleeping. Composition of organic art is the same as dream composition. A dream picture you have – a woman in a Viking ship going down a river, a talking tree, a blue bull with its head cut off – is very often a myth. Make note of such dreams as it can be found in pictures and mythical literature (Tolkein, Hindu imagery, German folk tales). If you dream of three women singing in a river it is the same story as Siegfried and the River Sirens. It is the world’s story and it is your story. The myth will explain your dream and your life.
Posted by Bernie Quigley at 6:09 AM

You said, "when a dream calls you, that is the time to go to it." This is so true. I've had friends come to me and say, "I'm ready to do dreamwork," but then it seems like the dreams aren't coming. Or even myself, with dream journals since 1997, I see long pauses between meaningful dreams. When it is time - it is time.

It is great reading you.

Thank you Clarice. So glad to know you. Taoism has it that in dreams it requires two - the one with the gift to dream and the second to understand it. they are considered seperate abilities but symbiotic. But there can never be an authority between the two - in dreams there is only friendship.

Greetings from Down Under, no not Australia, NZ the real downunder! Hi Bernie Quigley I was surfing blogs (as you do) looking for dream interpretation information when I came across your site. While this post wasn't an exact match I enjoyed reading your posts. Thanks for the read, I'll visit again some time. take care.