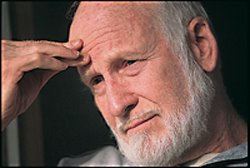 When Barr first walked into my office in North Carolina it was like a vision out of Kipling. Like Peaches and Denny, coming out of the jungle, but bringing a sense of the jungle back with him. He was fully at home in the jungles of Southeast Asia and it was something we had in common. He was nervous, uncomfortable and out-of-place in town and city. He was a huge man with a white beard and he always wore a blue United Nations beret. He was donating his pictures to Wake Forest University as he was a devoted alumnus. Over 10,000 in all, pictures he had taken as a war correspondent in Vietnam and Indonesia. Pictures from Time, Life, Associated Press. I immediately remembered the dancing girls from Bali in National Geographic from 30 years before. We became fast friends.

Whenever he came back to North Carolina he always stayed at our house. He loved our kids and the kids loved him, as children love big, playful men and think of them as bear playmates. I knew this was a new experience to him, as when my daughter was born Barr happened to be in the North Carolina hospital that day giving a talk to the trauma center about death and dying on a massive scale. This occation was of course more auspicious. I asked Barr to come up and see my wife and up he came, blue beret hat in hand. He had a deep, hoarse voice and when we took Catherine, about six hours old, and put her in his hands, she craddled in his palms.

"So that's what a baby looks like," he said.

Every year or so we got together in a Chinese restaurant in Amherst, Massachusetts, near where he lived and invariably we talked about Thailand, Vietnam and Indonesia. We had both been called to war and Barr went readily. I felt he never calmed down from the excitment. Like the rest of the elite photo corp in Vietnam, he was used to daily danger and I believe he thrived on it. But Barr was the consumate artist, and like every real artist, the child had managed to survive into adulthood intact and came forth with strength and playfullness. The soldiers of the South Vietnamese army were barely children and the playfullness showed in their faces. But it would quickly turn 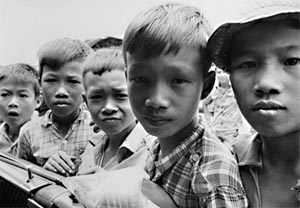 to terror as machine guns riddled the helicopters they were riding to battle. From the photographs, Barr always seemed oblivious to the bullets. It was the smiles, the joy and the terror - the faces of the young soldiers that his camera caught. I'd seen him focus when he was behind the camera, like he was suddenly alone and oblivious to present company and his surroundings. He was, perhaps, from many of his photos I'd seen of the most intense conflict, like those soldiers who are impercious to the dangers of battle. Intent instead and focused on his craft.

Last time we shared a meal we talked of Thailand and Vietnam. The war, the joy, the marketplace, the shamans at night and fortunetellers in the French city squares, the magicians with snakes and cobras which entertained the night crowd, the wary eyes of Buddhist monks in safron robes, the children always playing, always running, always kidding around with the Round Eyes, especially playful with a big bear-like man such as Barr.

One of my smaller children had asked that day what Paradise was. The park in the French Quarters at night and the children, even in wartime. That was Paradise. Thailand, Vietnam, Indonesia. That was paradise, Barr considered. I shall miss him.
Posted by Bernie Quigley at 2:00 PM

Mr. Quigley, I truly appreciate your great writeup on Barr Ashcraft. I had the pleasure of renting a house from Barr when I was a student at Umass, Amherst. He was an inspiration and mentor to many. In addition to housing and employing countless students over the years, Barr was a great teacher and role model to anyone in his orbit. I can remember the respect he had for us; a bunch of "know-nothing" kids. My favorite quote from barr was: "Be your own best teacher."