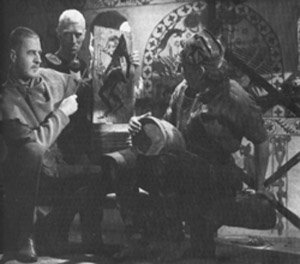 There is in a body of work that came about in the 1960s that is a harbinger of the new millennium. It is the full body of the mature work of Swedish filmmaker Ingmar Bergman. The classic series starts with the most famous of his films, The Seventh Seal, and the haunting specter of death leading the dancers in shadow to the dark side of a hill. The story is about soldiers coming back from the Crusades, only to find northern torn by plague. Only one survives, the comic peasant with a clear vision of the Celestial Mother. It is the end of the Christian age, and Bergman begins the film with an appropriate quote from Revelations. The Seventh Seal is Wormwood. Here is the essence of the prophecy from Revelations : And the seventh angel 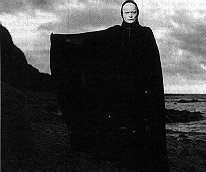 poured out his vial into the air; and there came a great voice out of the temple of heaven, from the throne, saying, It is done. (Rev. 16:17)

There follows a series of three films called the Silence of God trilogy, filled with a spiritual angst that was characteristic of the age, which could be interpreted as coming from anxieties that arise from sexual awareness in youth, the political uncertainties of the time, the destabilizing side affects of creating great art or other causes. They are masterful films, perhaps the greatest dramatic presentations of that time. But Bergman’s last major public presentation, a film adaptation of Mozart’s The Magic Flute, is perhaps his most important. It is the only moment in all of his work where the character experiences triumph in the end, and looking at the full body of work it becomes clear that the angst of the middle films were part of the spiritual and psychological struggle to find the character’s achievement in the last, and that those anxieties were allayed by the character’s spiritual victory in the last film. Other work would come, but much o fit seeking box-office cash and finding a generic audience.

Bergman’s rendition of The Magic Flute is a harbinger of the age here and pending. Taking his films out of their historical periods and viewing them as an expression of the artist’s own development and sensibility, his full body of work is a shaman’s journey which traverses ages, starting with The Seventh Seal at the very end of the Christian age and ending with The Magic Flute at the beginning of a new age. 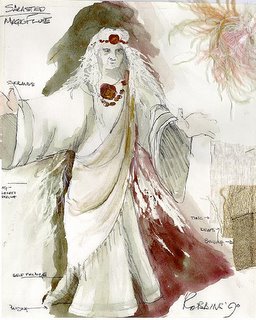 Perhaps none surpasses Mozart’s The Magic Flute (1791) in knowledge of the masculine principle and the feminine, yang and yin, first performed at the high end of the Renaissance as the masculine principle and the Renaissance came to dominate the Earth Mother. In Mozart’s story three warriors guard the Lord of the and his counselors, while three sisters accompany the Earth Mother. But now she is the Queen of the Night, the Earth Mother in her third and final phase. She is Kali, the Death Mother. In Bergman’s movie the Queen of the Night is at one point composed with the moon behind her surrounded by zodiac symbols. And Sarastro, the Ruler of the , is shown with his male counsel in caves that resemble those at . Sarastro, here in a beautiful presentation at Ithaca College, has commandeered the Earth, the organic realm of the Goddess.

Tamino, the hero of the story, follows on a sacred love quest and in the process moves his allegiance from the Earth Mother to the Lords of the and joins the Lords of the . Three boy spirits in a flying ship accompany the hero and give him three words to guide him in his quest. The words are: steadfast, silence, and obedience.

Mozart’s opera marks history’s turning point. It was the time of revolution throughout the world. It marks the end of the ancient regimes and the monarchies of . And it marks the end to the old Earth Mother cycle of Europe – white phase, rose phase, black phase – which brought them about over the proceeding thousand years. has a special place here and has a special trajectory. The age upon us and that which awakened with Mozart is the Enlightenment. All of Europe entered the Renaissance and the Enlightenment, but it was only the German and Austrian regions of Europe that embraced the Power Principle and at the same time incorporated the yin or feminine sensibility - Abbess Hildegard and Meister Eckhart to Goethe and Leibnitz to Schopenhauer and Jung, embraced the yin world, this tradition follows unbroken from the 12th century until the present. The other rising Protestant nations rose in denial and opposition to it.

faces a new age today and once again sings in one voice. And it sings a German song; its anthem is Beethoven’s Ode to Joy, written within four years of The Magic Flute. The flag of the European

Union is a study in zodiac symbolism, a blue background representing sky and air, the masculine field of Aquarius, and 12 gold stars, the full counsel of the zodiac; the council of Sarastro and the Lords of the Temple.

Posted by Bernie Quigley at 5:57 AM