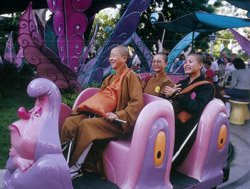 Did you ever dream that you were dreaming of someone and woke and called them and they were dreaming of you? I’ve heard that dream from a lot of people but only furtively, as if it were a dark secret. One such event – an Arrow in the Blue as Arthur Koestler called it – occurs only a few times in life, but it changes everything. It gives personal experience evidence to Einstein’s great vision that time as we experience it is an illusion. An honest person,

as Koestler was, must base her or his life threafter on that moment of truth. It is the key to everything. Anyway, what I like about this picture on the left by my blog colleague Sad Monk, (photos - all but Leonard Cohen - by Dan Farber- Visions of Buddhist life) is that you can see in the faces of the monks the shock and joy of visiting the outside world (at its contemporary essense - Disneyland). Indeed in this context they look kind of geeky and freaked out. The deeply Introverted – if they have a decent venue to skillfully advance their Introversion and these monks do - anchor the outside Extroverted culture 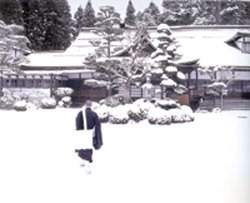 within itself. These lovely Elfs make a brief visit to the outside and look like fish out of water. But how serene they are in their own house. We Quigs live in old places, heat with wood and have bears in the yard and an occational wandering moose. When we venture briefly to the outside world and visit modern motels where you slide magnietic cards to open the door and a stop at McDonalds while travelling, it brings us the same innocent pleasures. Maybe the monks here follow the magic animal to Enlightenment. For Neo and Alice, it was White Rabbit who would lead the way. But my astonishing Australian dreamer friend dreamed of a luminous slug and a knapsack – an Earth Guide, like Caterpillar here – and it took her on a six-month journey to the heart of the Earth Mother Herself. The week of the Caterpillar, my young daughter had the same dream as my Australian friend and so did my wife and

Sister-in-law, but I’d not mentioned the dreams to any of them. For myself, the mountains are silent. So I went to visit a Buddhist monestary nearby in , but Buddhism came by the crate and in pounds. My children’s friends dream of things coming out of the ground and flying down chimneys. It is characteristic of our age. We, as a people are returning to earth in the new millennium & returning to ourselves. I go here. This is my monk. Buddhism without bullshit: Leonard Cohen.
Posted by Bernie Quigley at 8:13 AM