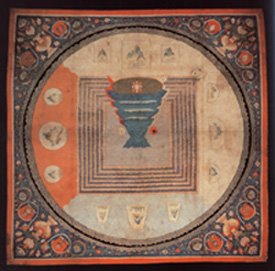 Thoughts: At the beginning of these journals I illustrate an Eastern idea which has been amplified by Swiss Depth Psychologist C.G. Jung. That is, the idea that one can have a dream that another has and that significant events can arise spontaneously in dreams of different people and at different times – but the different times are not random – they form a package over a specific period which may be greater than one individual's lifetime; that is, as one individual may share in another's dream life or visionary life, so the individual can share in dreams beyond her or his time. As different places can have varying sincerity like Linus’s Pumpkin Patch, so can different stretches of time. I use Salvador Dali’s visions of a White Grand Piano to illustrate this and explain this idea more or less as it is understood to what the Dalai Lama refers to as “conservatives” – Old School, as he says he is. Myself I have had parallel dreams and important dreams shared by other people. My dreams have always been shared by women – some I know, like my wife, others like miss3, whom I met way later than the dream.

Anyway, a reader has kindly shared an interesting vision, which he or she feels portends to a tragedy which has happened or is perhaps about to happen. The vision begins with a mention of Mount Meru, in Tibetan Buddhism, the center of the Cosmic Universe - a singular ray of light which the adept attempts through devote practise to embody. I would like to make a few comments on this particular vision and on dreams in general. First of all, when a person has a difficult dream that stays with him it is usually and important dream – what Native American Indians call a “Big Dream” – suggesting something from the Unconscious of inherent originality. One point made earlier: persons capable of having clairvoyant dreams are not – in the Taoist realm – inherently great at understanding their vision. You see this from very early times. Abbess Hildegaard’s visions are cosmic, but her explanation of her dreams is faulty and generic. Likewise, Magritte’s intuitions are cosmic but his explanations are pedantic and generic clevernesses prepared for a publicist class of misunderstanders. What makes Magritte a great painter and visionary makes him a poor publicist. Breton the the Surrealists intentionally confounded the uninitiated to send them away from their sacred circle. Jung explains this division of abilities in personality type studies – Myers-Briggs in the U.S. Taoism as well makes the point – the vision requires one to have it and one to bring it out into the world. They are two people with different skills, and in the vision the two are One: the Inside and the Outside. In Myers-Briggs terms, I believe these would be INFP for the dreamer and INTP for the interpreter. When the Dalai Lama brings a dream or a thought to the Oracle in the Old Schol tradition for explaination and interpretation he describes, this is the Inside/Outside condition.

The Second point is more important. When people have a Big Dreams they almost always feel it portends disaster. It creates fear because it comes from the Unconscious where the dreamer doesn’t often go and can only go alone with difficulty. Most often Big Dreams are auspicious. A death in a Big Dream usually means a birth, as in Tarot cards. But of course, the dream may be a dark vision. For example: I dreamed in New York City in early mid-life – where I found it difficult to dream – that a Catholic nun was dancing with a cloak over her head in the hallway of the house where I grew up in Rhode Island. I came out of my room and my father, at the other end of the hall came out and aid, “Don’t worry, it’s not your mother.” When my sister called home the next day she found my cousin had died – the first of my generation to die in my family.

Perhaps this vision is a dark harbinger. But the reader said he or she had the dream late in 1996 and in . This was an astonishing dream time, and I have found Australians to be particularly astute dreamers (if this person is an Australian). As mentioned in the beginning, these journals here are about and from thinking which occurred in dreams and intuition between 1994 and 2005, the life cycle of the White Buffalo, who was born in one millennium (and one Platonic month) and died in another. I am also interested in this dream/poem because it contains an anecdote about a goat and my journals here were originally jotted in 1996 as a five-page poem called "The Goat Man" ccompanied by a picture which I painted in my barn, and twice this week I have received goat things from kind readers. I raise sheep and the kind of

sheep I raise, sheep – beautiful North African sheep - (photo A here by William and Helen Kirby-Mende who have the best sheep) – to some degree resemble goats. I wish I knew more about this dream of the reader – the account here was written in 2005, almost 10 years after the fact, and to understand important dreams like this there should be a recollection immediately after. But – as a dream – this poem appears to have key elements of a new Awakening: the Sacred Mountain at the Center of the Universe; the Deathless Child which transcends avatars and Awakes new cycles of spirit and psychic awareness; a young Magical Animal – goats are capricious Trickster animals which initiate mischief and break old orthodoxies, clearing the Psyche for new Awakening; and a Great Beast lying on its back. It is important that the vision was in the sky, in Western (Zoroastrian) cosmology, the realm of the zodiac reflecting the millenia we are entering.

In the sky a vision appeared
To the Sky Dragon:

A mountain whose shape he realized -
Mt. Meru - centre of the Universe.

From its clear form arose a face
A small boy in profile.
The face transformed into an enthronement crown
Clear against the vast blue sky.

Another form arose, a young sacrificial goat
Pleading for its life.
Alas, the boy was to be sacrificed!

The Great Beast, huge and ugly appeared
Lying on its back -
Totally defenseless and vulnerable.

What could it all mean?

The Sky Dragon wept with frustration.
Why did he receive this vision?
He felt powerless to act
Yet knew some skillful action was required.

One day he decided the time had come
To send the vision on the winds
To blow where it may, to sitr
The consciousness of those who suffered
And those who were the cause of suffering
Under the rule of the Great Beast

This vision suggests to Sky Dragon the child monk, the Panchen Lama, whose fate is unknown. My essay earlier on the Panchen Lama prompted the correspondence. Dreams tell several stories and as this tales makes clear Sky Dragon's point of view, it also illustrates his or her own

Awakening: the Great Beast lying on its back here is very like - exactly like - the path of Shiva abandoning his old ego after he has outgrown it, so as to find new life/dance - the deity stomps an a leathery old dwarf (old beast) underfoot (as The Beatles left behind four "corpses" abandon their Old Selves and emerge as new "butterflies" at Sgt. Peppers) - Shiva casts the old skin and begins his new dance of "the Creation of Birth and Death" and leaves the leathery dwarf stomped underfoot. Surely that is here in the dream as well: the Deathless Child appears in the Mountain in the Center of the World - this is the new Creative, Psychic, Spiritual Life, transplanting the old abandoned and useless beast. In fact, as the dreamer pointed out in a letter - he or she at the moment of the vision had just entered initiation into new cosmic life form and the dream vision here is one which classically accompanies a true spiritual change. The Deathless Child is born out of the death of the Great Beast. But the dreamer is part of the world and when the dreamer enters Awakening, so does the World begin again as well; the Beast is Kali - the Death Mother - her Reign is up in the world and the Deathless child Awakens again in the world. The dreamer fears for the health and welfare of the Panchen Lama and so do I. But the part of the

boy that is divine is a light that cannot die - the Deathless Child brings new life form the Moutain at the Center of the Universe, and in that, this is a most auspicious dream - coming into the world with other events - late 1996 and early 1997 - the spontaneous Awakening of thousands of Chinese in the Falun Gong, the widescale popular interest in Tibetan Buddhism in the West and the rise of the Hale-Bopp star event which hung over my farm every morning for a month when I went out to feed my chickens.

Posted by Bernie Quigley at 2:47 AM